Welcome to the Jefferson Street Neighborhood Over the last 134 years, the Jefferson Street neighborhood has grown and changed with its city. But, its beautiful homes—with their elegant façades and neatly kept lawns—preserve pieces of Paducah’s past. Several of the spacious structures have stood by this street for more than 100 years and have housed some of Paducah’s most prominent citizens.

Now, Jefferson remains at the heart of local culture, connecting the LowerTown Arts District with the Coke Plant in midtown. It’s a unique place to live. Paducah incorporated Jefferson Street and its adjacent Fountain Avenue into the city limits in 1884, according to a Paducah Sun article from Aug. 20, 1982. About this time, gravel covered the wide streets, but workers soon began laying tracks for an electric streetcar to ferry passengers between Paducah’s downtown area and its fairgrounds. Then, locals started moving into the suburbs as commercial increased downtown, and they particularly liked neighborhoods located close to the streetcars. Jefferson became one of Paducah’s first and most popular “streetcar suburbs.” Eventually, the automobile changed the face of the city. The streetcars grew less and less popular until the lines stopped running. The Paducah Sun says the city decided to take up the tracks later in the 20th century and plant trees and grass in their place. Now, small park areas cover the Jefferson neighborhood medians, marking the old streetcar line.

And, as the tracks came and went, families built their ancestral homes along the street’s sidewalks. They created a neighborhood that grew important to city culture. In 1982, the United States Department of the Interior honored that importance when it placed the Jefferson Street-Fountain Avenue neighborhood on the National Register of Historic places. 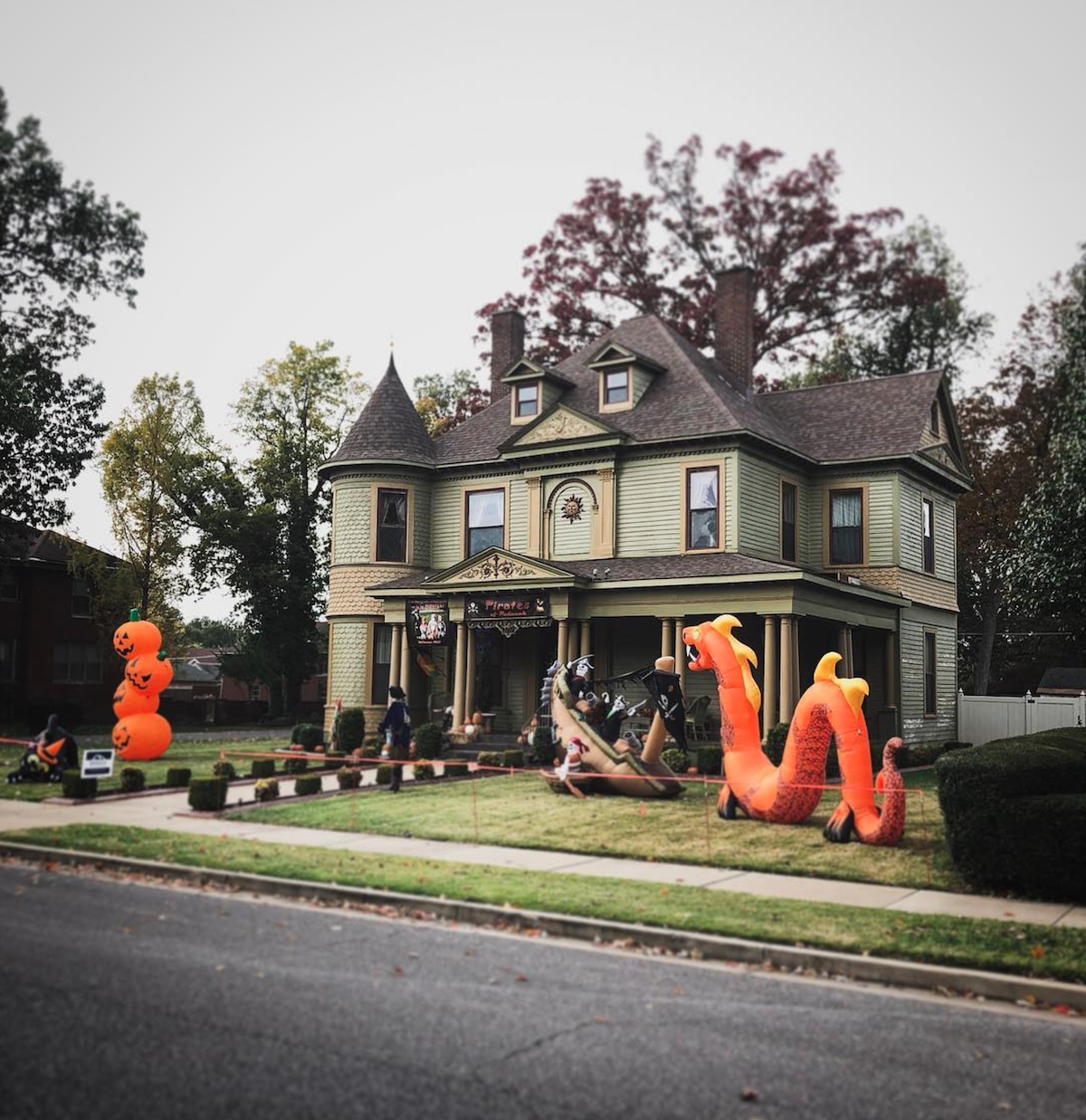 Today, Jefferson Street looks like many others in Paducah. People carefully groom their lawns, and they decorate their porches and doors to reflect the changing seasons.

But, there’s one tradition that makes Jefferson stand out. It’s a tradition that turns those quaint houses, with their adorable shutters and tasteful landscaping, into ominous horror shows.

It happens every year on October 31.

The annual Jefferson Street Halloween bash began roughly 18 years ago, when Dale Perry and a handful of neighbors began constructing elaborate Halloween displays on their lawns to delight trick-or-treaters. More houses jumped on the trend, and as Dale says, “it got out of hand.” Jefferson residents now put so much effort into their creepy decorations and displays that Dale estimates about 3,000 people visit the street each year to see the spectacle and snag some candy. Local organizations and churches even set up booths to hand out food and drinks to the little princesses, ghosts, and superheroes that walk past.

“The event is just something everyone in the community gets behind—it’s a civic deal,” Dale says. “Everyone seems to enjoy doing it.”

After Halloween ends and families take their tired superheroes home, the skeletons, spiders, and cobwebs return to Jefferson Street basements to await another year of fright. Then, the neighborhood returns to its quiet, quaint self.

It becomes—once again—a respectable and historic piece of Paducah. Partake in Paducah – The Brand